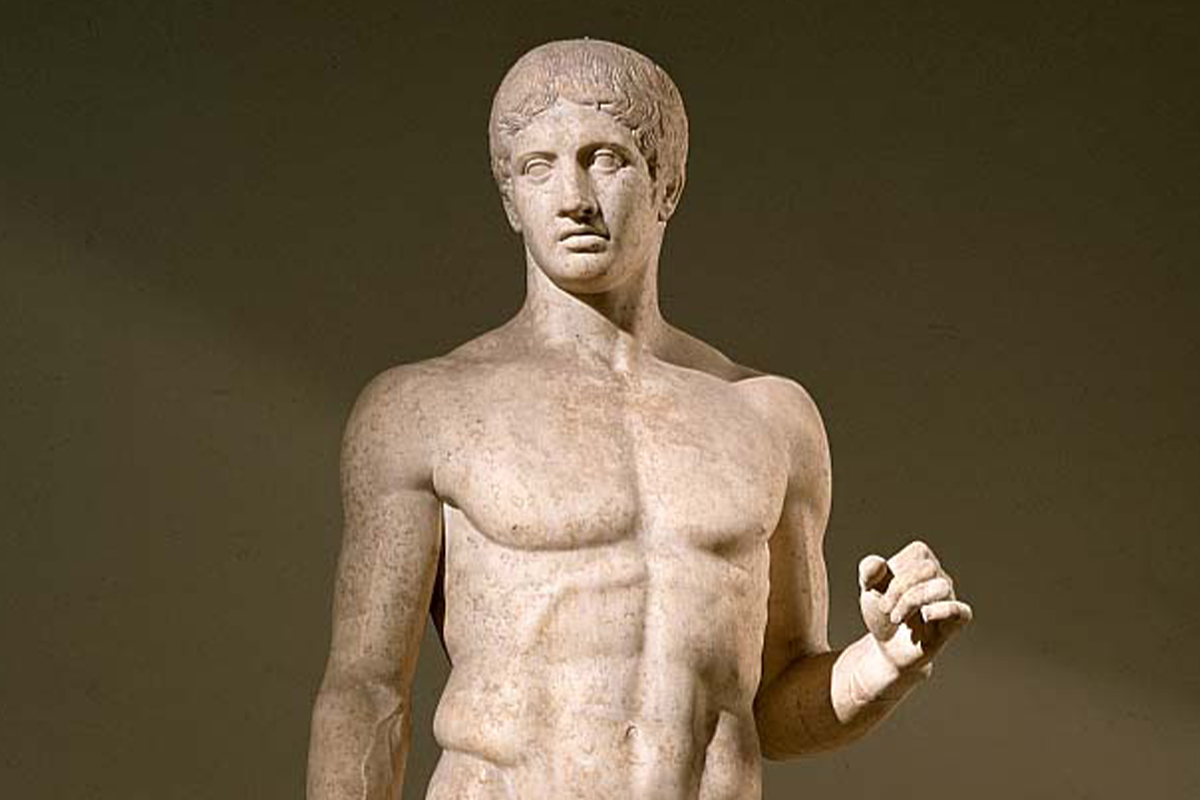 The Doriphor (from the Greek word “doriforos”, which means “spear-bearer”) is a marble sculpture that dates back to the first half of the 5th century, as of today exhibited in the national archeological museum of Naples. The sculpture is the best Roman copy found in Pompeii – and also the most famous version – of an original bronze Doriphor from the classical age, realized by Polyclitus around 450 a.C. and, unfortunately, lost. The Doriphor from Pompeii is made of a special variety of Carrara marble from the city of Luni.

the Doriphor: Description and Style

The Roman copy of the Doriphor by Polyclitus is an example of the application of a statuary standard aimed at the representation of ideal beauty. The Doriphor probably represents a champion of military running (an athletic discipline where you had to run carrying weapons with you). His body is, in fact, powerful and muscly, with wide shoulders and pronounced pectorals. Some say as a hypothesis that the young man is the semi-God Achilles.

The man is on his foot, apparently still, but hinting at some kind of movement he’s making given his hip’s position: the weight is entirely on his right leg, “the load-bearing” one, while the left leg is unloaded, therefore flexed and backed down, with the heel lifted from the ground and the right hip results, in this way, lifted from the ground as well, while the right shoulder is down, to compensate.

According to a reconstruction hypothesis, almost certainly, originally, the Doriphor held with his left arm a spear, leaning on his shoulder, and, according to some, a shield as well. With his right arm, instead, he might have held a sword, in its case, with his hand and rear-facing. The anatomy of the young man is regulated by the canon of the proportions, with a great formal balance, emphasized by the precious material with which it’s been realized, candid and elegant in an unparalleled way. 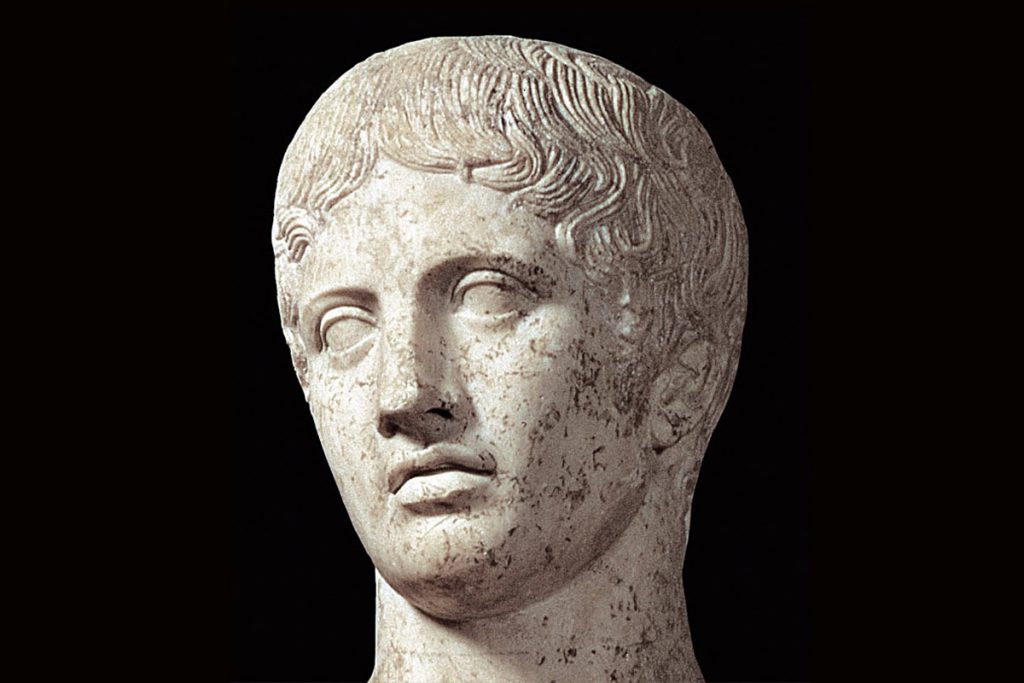 the Stone Materials in Luni

The life of the city of Luni, an ancient Roman city that is currently located between Liguria and Tuscany, is dotted with the use of various and heterogeneous stone materials. Heterogeneous and complex is, in fact, the local geology, in particular, the area that includes Promontorio Orientale Della Spezia, the final area of the Magra-Vara River basins, and the Apuan area. Right here, there’s the possibility to retrieve materials that surface along the slopes and in more or less coarse
debris-full fractions (pebbles and bigger stones) scattered in the landslides, alluvial beddings, and coastal deposits.

The majority of the marble extracted and diffusely used in this territory is the one from Luni: a white marble that’s very similar to the “more popular one” extracted on the Apuan Alps, an ornamental stone characterized by a uniform, candid white color, often with golden reflexes, deriving from low degree metamorphism on very pure calcars. Many other stone materials used in Luni have been studied and classified: in many cases, they have discovered it belongs to the metamorphic sequence that includes the so-called Punta Bianca marble. 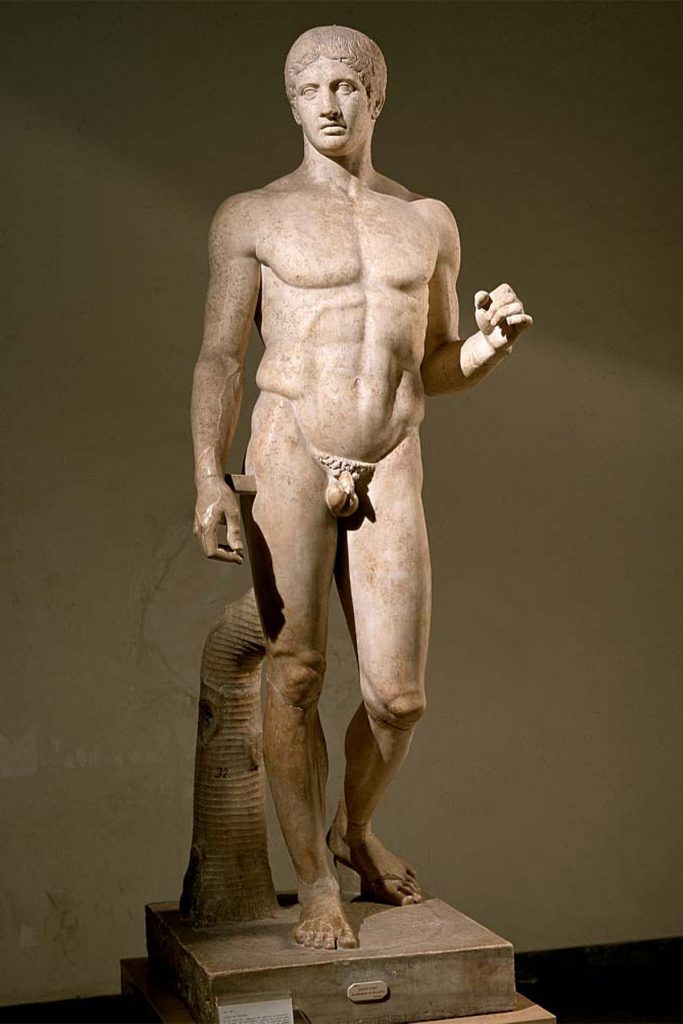 deposits and uses of Luni Marble

The marble of the Doriphor, alongside the huge variety of white and Bardiglio marbles, has contributed in a determinant way to creating the fame and fortune of Luni, so much so that the caves became a personal property of the Emperor starting from Tiberius (14-37 d.C.). In those times, in fact, the extracted material was largely used in the city, both in public and private buildings. Specifically, the Luni marble is famous for being used both in statues (for example, the Pietà by Michelangelo) in architecture and in sculpture, in load-bearing elements (architraves, capitols, columns, pillars, pedestals), coatings (frames and wall plates, floor plates) and ornamental elements (portals, fountains, altars, steles, tombstones).

The familiarity of stone in a London project