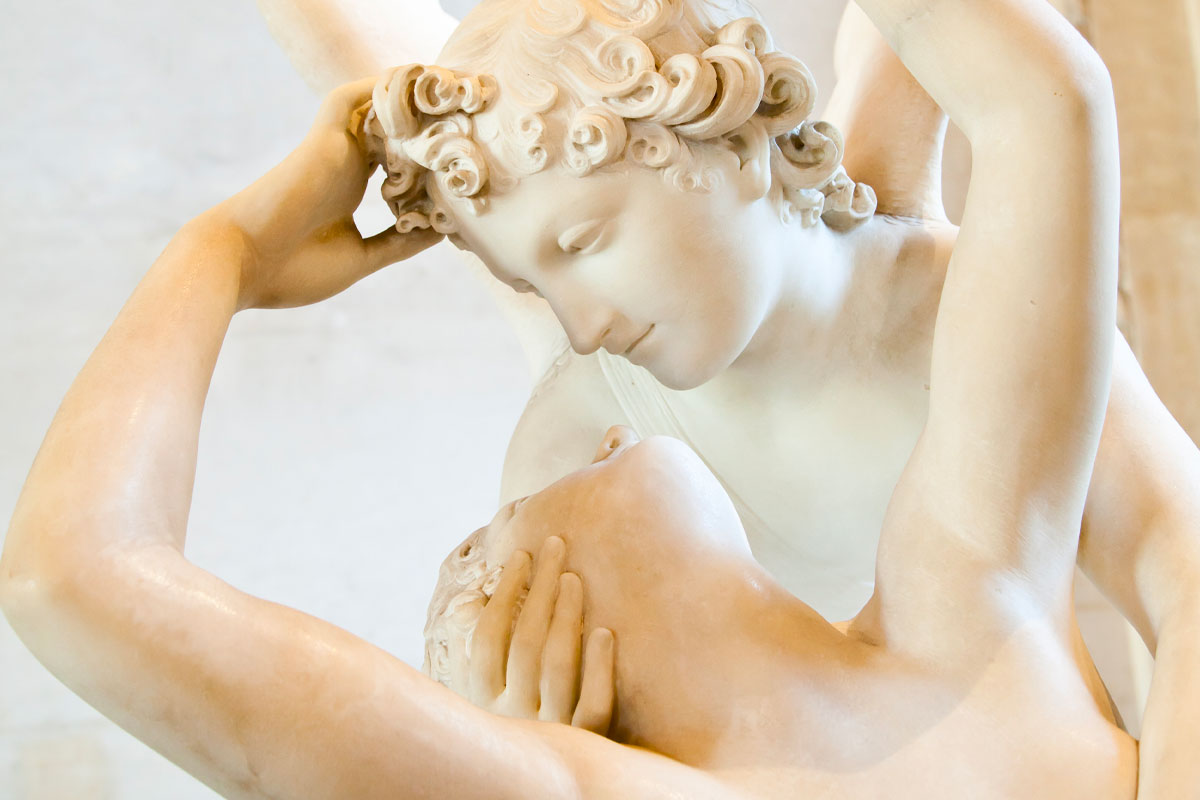 The tale of Cupid and Psyche, written in the second century AD and included in the “Metamorphosis” by Lucius Apuleius, is a story of love and envy destined to inspire artists of every kind, including Antonio Canova.

The young protagonist is Psyche who falls in love with Cupid, the son of Venus but to fulfill her dream to be with him and be transformed into a Goddess, she will have to pass some very difficult tests.

The Story Told by Antonio Canova

The moment sculpted by Canova is that of the awakening of Psyche from the infernal sleep: but the artist takes a poetic license with the representation of Cupid that wakes her up not with an arrow, but with a kiss. Leopoldo Cicognara, in his “Storia della scultura [History of Sculpture]” (1823), says that Frederick Augustus Hervey, 4th Earl of Bristol and Canova’s client, persuaded the artist to make his sculptures more passionate: that’s the reason behind the kiss, the true protagonist of the masterpiece, which is a perfect representation of that return to that “ideal beauty” theorized by Johann Winckelmann.
The erotic tension, the sweetness, and the passion transpire from the statues’ gestures: Cupid embraces Psyche while holding her head, whereas Psyche, with the head reclined back, holds his head close to her. All the elements, from legs to arms, from Cupid’s wings to the rock where Psyche is laying, represent the research for harmony and balance pursued by the artist. Furthermore, the wings and their legs create and X, in the center of which we precisely have the moment of the kiss.

The sculpture, which measures 155x168cm, was made with Carrara marble, which looks alive due to its extremely soft and sinuous shapes. The marble is perfectly polished, bright, and white: back then, they used to underline the whiteness of sculpture because they believed that Greek sculptures were white. Only later it was discovered that the Greek statues were colored.
For the majority of his sculptures, “Psyche Revived by Cupid’s Kiss” included, Canova used to follow a strict creative process, thanks to which he could check the results of every step. A process thoroughly described the painter Francesco Hayez in his “Le Mie Memorie” [My Memories] (1890).
Canova’s first step in his process would be the drawing of idea drafts inspired by ancient statues of which he would study their poses and models. From a young age, he would observe Ancient Greek and Roman marbles for hours, with a preference for mythological and heroic themes. After the creation of one (or more) clay models and a small plaster model, before landing to the full-size clay model. This was then destroyed to obtain the shape, a plaster cast that was filled with liquid plaster, and with the insertion of metal cores as the supporting structure.

The solidification of plaster would then create the full-size plaster model, which was then polished and refined before adding some bronze nails, which would then serve as reference points to reproduce the exact same dimensions on the marble version. The marble block was then placed next to the plaster statues and they were both positioned under two frames, from which wires with lead descended to reach the projections of the plaster; this was done to be able to see how far they could go into the marble block. The final touch was done by Canova himself, who would make the marble look alive: to do so, he used to smooth the marble with a particular method, through which he would pour on the sculpture the so-called “acqua di rota,” which was the kind of water used on the grinding wheel to avoid the overheating of steel. This water would give the marble a pinkish shade, similar to that of flesh, and in “Psyche Revived by Cupid’s Kiss” this is particularly visible on the right side of the girl and the folds of the clothing. In this way, Canova shaped his sculptures with a sensual and immortal beauty that can be easily found on “Psyche Revived by Cupid’s Kiss.”

One last fact: there are multiple versions of “Psyche Revived by Cupid’s Kiss,” but just two of them were made by Canova. The first one (1793) is currently at the Louvre Museum, while the second one (1802) is at the Hermitage Museum. The myth has been a source of inspiration for many painters, sculptors, poets, and artists in every century, especially during the Renaissance. Among the most famous examples, we find the fresco of Giulio Romano in the Hall of Cupid and Psyche at Palazzo Te in Mantua and the frescoes for the lodge of Villa Farnesina in Rome made by Raphael. Among the greatest masterpieces of the 1800s, we find the paintings “Psyche et L’Amour” (1889) and “The Abduction of Psyche” (1895) by William-Adolphe Bouguereau. Last, we can’t forget about the famous “Ode to Psyche” written by poet John Keats in 1820. A love, that of Cupid and Psyche, destined to live forever, just like the two gods themselves.

Run-up to Marmomac 2019: natural stone and water in experiments with Solid Liquid Stone