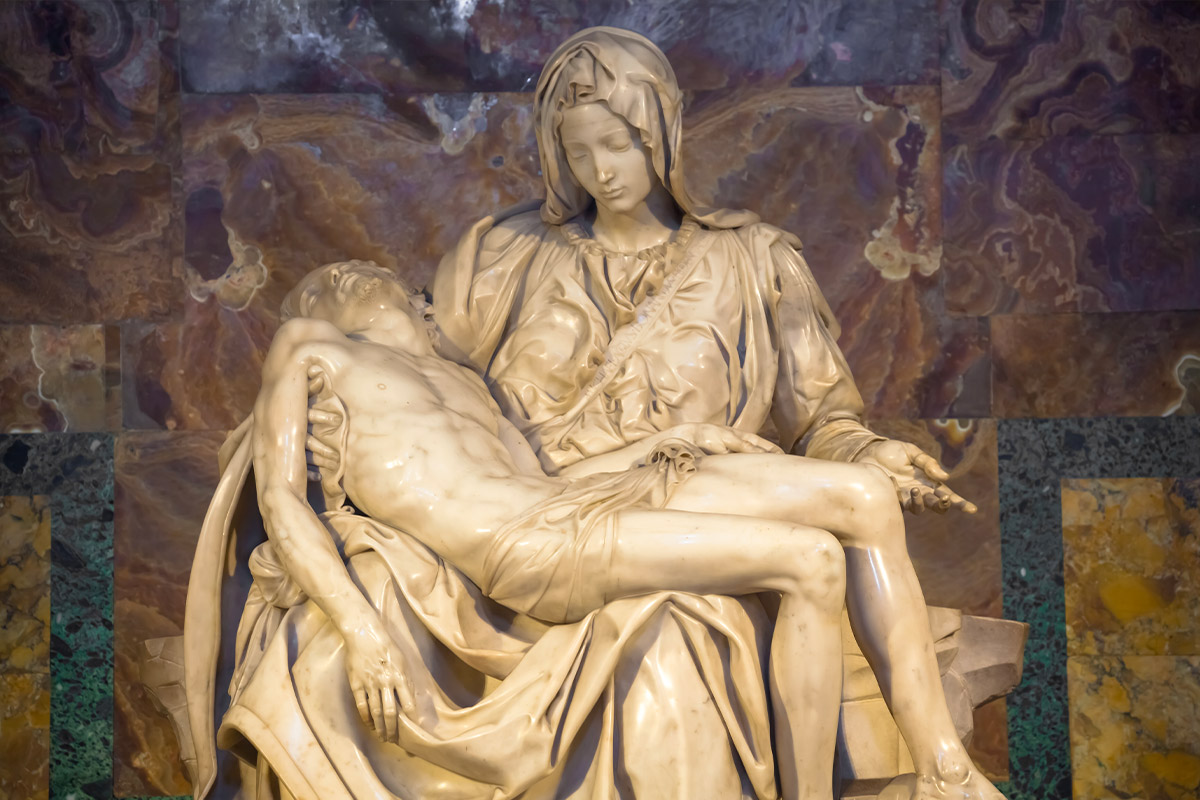 1,74m x 1,95m, the Pietà (“Pity”) of San Pietro is a beautiful marble sculpture by the great Michelangelo Buonarroti, which is now preserved in the St. Peter’s Basilica in the Vatican City.

Since its construction, it has been defined as one of the most enchanting sculptures in the history of art and one of the most representative works of the Renaissance. The Vatican Pietà was completed when Michelangelo was very young, he was about 25 years old. But what were the steps that led to the creation of this artwork? And what curiosities can we tell you about it?

The Commission of Pietà

In 1497 Michelangelo was commissioned by cardinal Jean Bilhères de Lagraulas a sculpture of a Virgin Mary, with Christ dead in her arms. He ordered the statue of the Pietà to be placed in the chapel of Santa Petronilla in the Vatican. Precisely because of the 1500 jubilee celebrations were approaching, many French pilgrims would have visited the chapel. Since Michelangelo was a picky sculptor and lover of high-quality raw materials, it took him nine months to choose only the right block of marble and to transport it from the Carrara quarries to Rome, where he sculpted it. The sculpture was carved in a single block of white and blue marble, which was extracted by making a deep cut in the quarry, in which metal chisels were then inserted.

However, the story goes that on the same day that the sculpture was installed in the church of Santa Petronilla, on August 6, 1499, Jean Bilhères died.

Michelangelo’s Pietà is now located in the first chapel on the right of the aisle. It was moved there only two and a half centuries after its creation. Initially, it had been placed in the Chapel of Santa Petronilla, a French church near the Basilica of San Pietro.

The marble of the Vatican Pietà is so bright that they say that Michelangelo had dedicated to the polishing an equivalent time to what was necessary to sculpt the masterpiece itself.

The Vatican Pietà is the only work that Michelangelo ever signed. There is an episode, narrated by Vasari, in which he reveals the reason for this signature, engraved on the Virgin’s breast: it is said that some Lombard gentlemen were admiring the beauty of the statue of the Pietà and, after praising it, they tried to identify its author, believing that it was the work of one of their compatriots. Michelangelo, who had listened to the discussion, hid in the church and carved his name on the statue during the night.

Despite great admiration, there were many criticisms regarding the young aspect of the Virgin. It seems she is in her teens but this was a conscious and theological choice by Michelangelo: the uncorrupted Virgin, the Immaculate Conception, is the symbol of a crystallized youth, which cannot fade.

The statue of the Pietà has another particularity, a little more difficult to notice: the Christ has an extra tooth, a fifth front tooth. This tooth is named “the tooth of sin,” and in the works of other Renaissance artists, it’s a prerogative of a negative character. The Christ of the Pietà, however, with his death, takes upon himself all the sins of the world.

A Trip to New York

In 1964, US cardinal Francis Joseph Spellman asked Pope John XXIII to exhibit the Pietà as part of the 1964-65 World Exhibition in New York. The Vatican agreed: thousands of Americans and visitors to the exhibition had thus the chance to see the sculpture directly, placed for safety reasons behind a plexiglass barrier weighing over 2 kilos.

On May 21, 1972, a Hungarian geologist, Laszlo Toth, circumvented the surveillance of St. Peter’s Basilica and repeatedly hit the Vatican Pietà with a hammer. He removed the left arm of the Virgin and caused numerous damages to the face, knockin off a chunk of her nose and the left eyelid. The man was arrested before he could continue.
There was a long debate at the Vatican regarding the type of restoration to be carried out: many suggested leaving the face of the Madonna disfigured, as a testimony of an era dominated by violence; others preferred a critical restoration, in which the missing or redone parts would be highlighted. In the end, the proposal for full restoration was taken into consideration. It was concluded that even the smallest imperfection in the perfect sculpture of Michelangelo Buonarroti’s Pietà would have been intolerable.

Hotel & Marble: The Use of Marble in Luxury Hotels