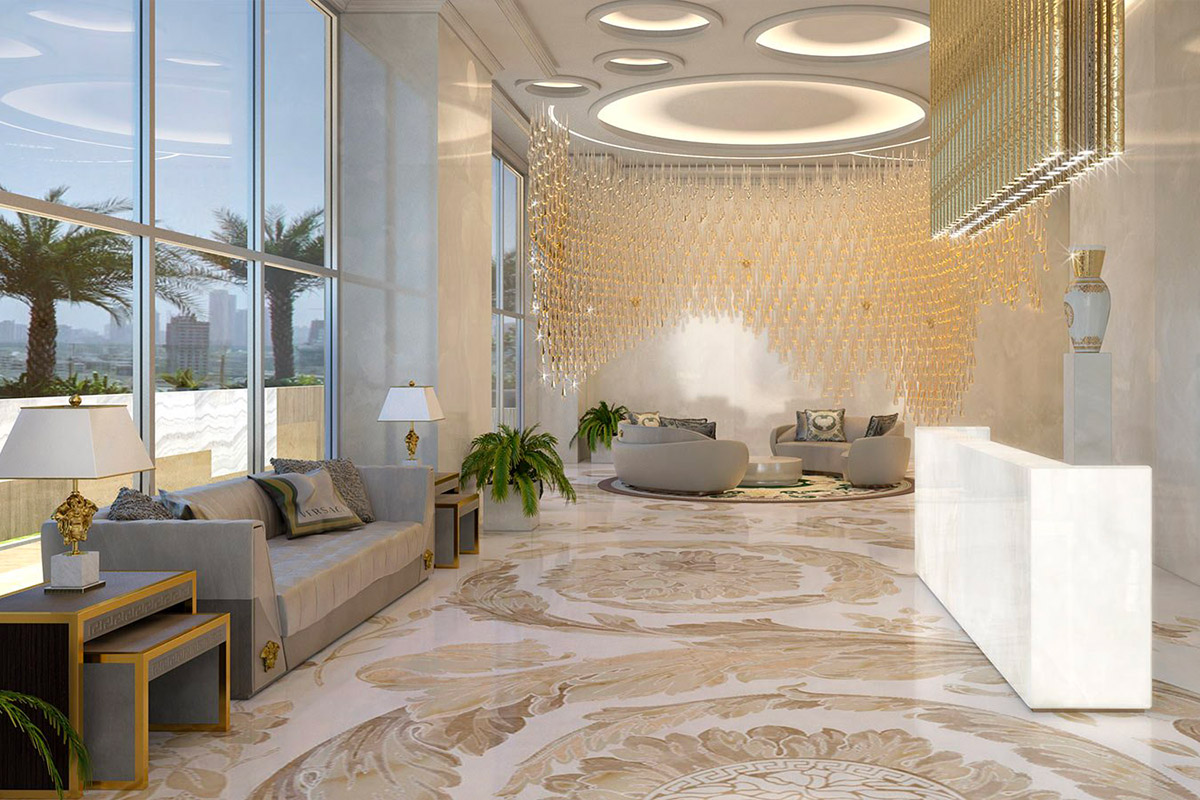 In the popular imagination, Versace represents fashion, the Medusa, and one of the most well-known and appreciated Italian brands abroad: but Versace is also interior design, fine materials, including marble, and luxury projects that are everywhere nowadays.

Here is a focus on the brand, its creative line, and the relationship with marble, used to create decorative elements and interiors with an instantly recognizable appeal.

the birth of an iconic name: Versace

Gianni Versace (born in Reggio Calabria in 1946) is the founder of the brand of the same name: since he was a child, he was passionate about fabrics (his mother ran a tailor shop) and, as soon as he arrived in Milan in the ‘70s, his talent got noticed right away and this led him to open his clothing line in 1978, which was an immediate and great success of public and critics. Between the ‘80s and ‘90s, he collaborated with the leading photographers and top models, creating iconic prints, looks, and accessories. In 1988, his sister Donatella began working with him. The next lines created are the Versace Signature, Versus, and Versace Home Collection: the latter initially intended as a fabric collection, also included porcelain, marbles, furnishings, and interior design accessories (the Maison has its design studio dedicated to luxury hotels and residences). On July 15th, 1997, at the top of his career, Gianni Versace was murdered in his Miami Beach Mansion, and his sister Donatella succeeded him as the creative director of the brand. Today, the fashion house is a reference point of Made in Italy excellence.

Versace Ceramics and the Marble collection

After Gianni’s death, the Home Collection was split into two lines: the Home Collection on one side and the Versace Ceramics on the other (in partnership with Gardenia Orchidea), focusing on ceramics and materials. (in partnership with Gardenia Orchidea). The choice of fine raw materials and creative color combinations (without forgetting symbols such as the Medusa and the neoclassical Greek motif) is the key to Versace Ceramics.

Among its collections, we find the Marble one, which includes shades ranging from white to black, from gray to gold. The 6 shades present the onyx’s inflections, which make them particularly bright and which are often characterized by the Medusa effigy or rosette. The Versace marbles can be found in private residences and hotels, giving the floors and walls of the rooms (kitchens, bathrooms, bedrooms or living rooms) a luxury finish.

marble in the interiors: the Versace Mansion and Palazzo Versace Dubai

The Miami Mansion purchased by Gianni in 1992 became a real corner of heaven for the designer: built-in 1930 and originally known as Casa Casuarina, it was completely renovated and enlarged by the designer, who turned it into a baroque triumph. Mosaics and marbles are on every surface (including the swimming pool that recalls the motifs of a Versace scarf) with colorful hints and elaborate patterns. Today the Mansion has been turned into a hotel and you can admire the marble floors under a new light since they have recently been polished! 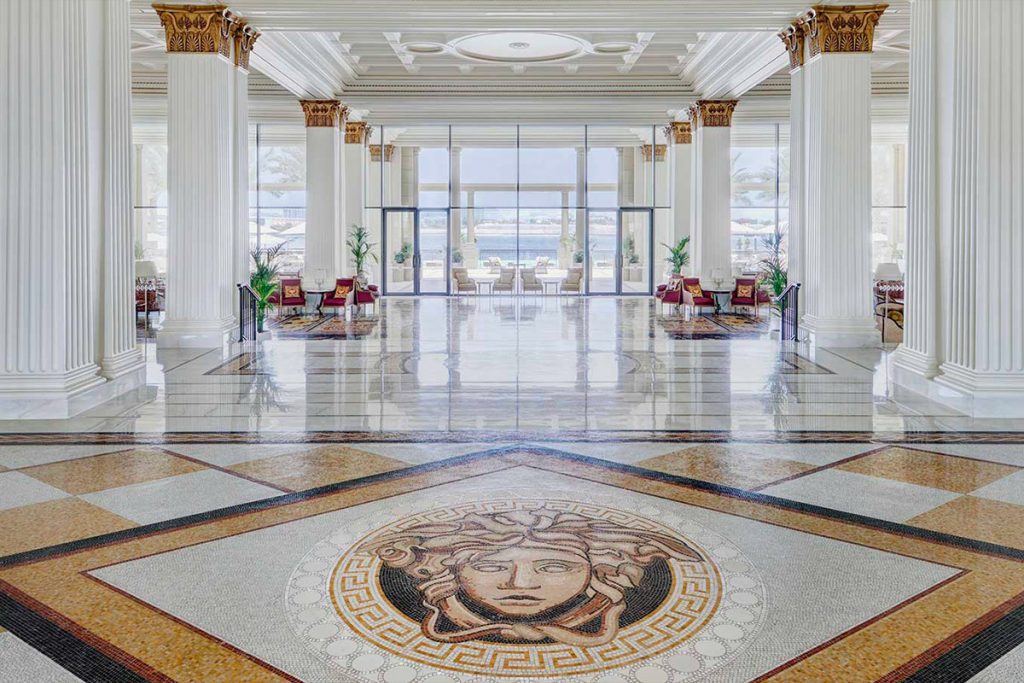 Another luxury jewel with many marble elements is Palazzo Versace Dubai, which represents a mix of Italian neoclassical style and Arab architecture. In the lobby, you can find a 100 sqm mosaic entirely made of marble, while the Giardino restaurant features marble floors and classic columns. The bathrooms of every room feature Carrara marble floors, while the Imperial Suites even feature a marble staircase! The floors of the SPA, which has a surface of 100 sqm, are in Absolute Black Granite. A real dive into the Versace world, surrounded by the beauty of marble! 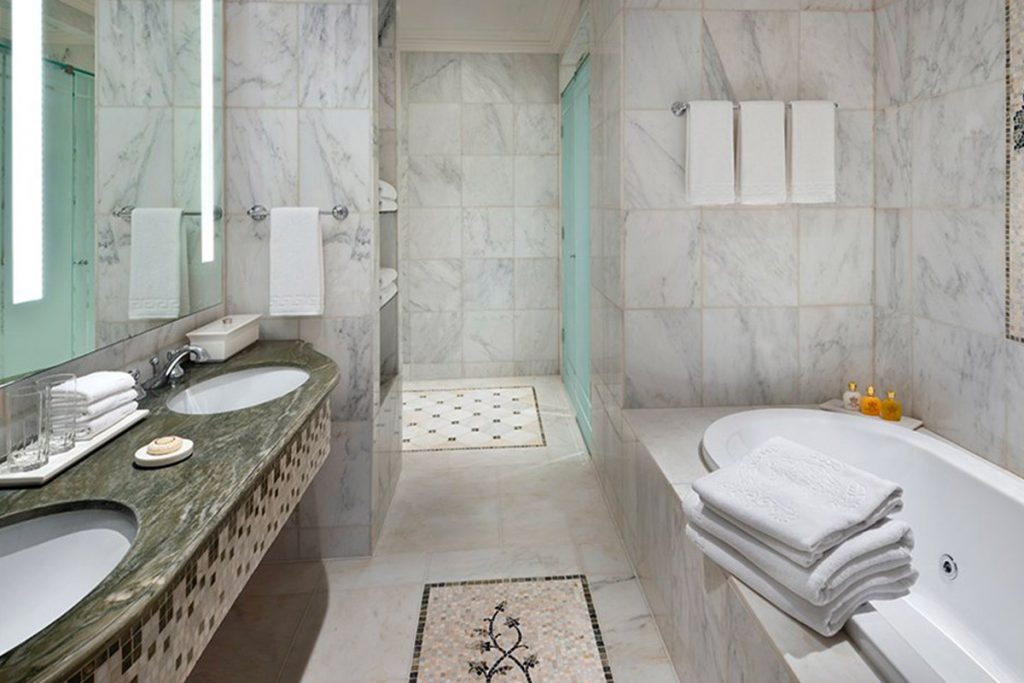 Natural stone builds a community: award for the new Museum of Palestine