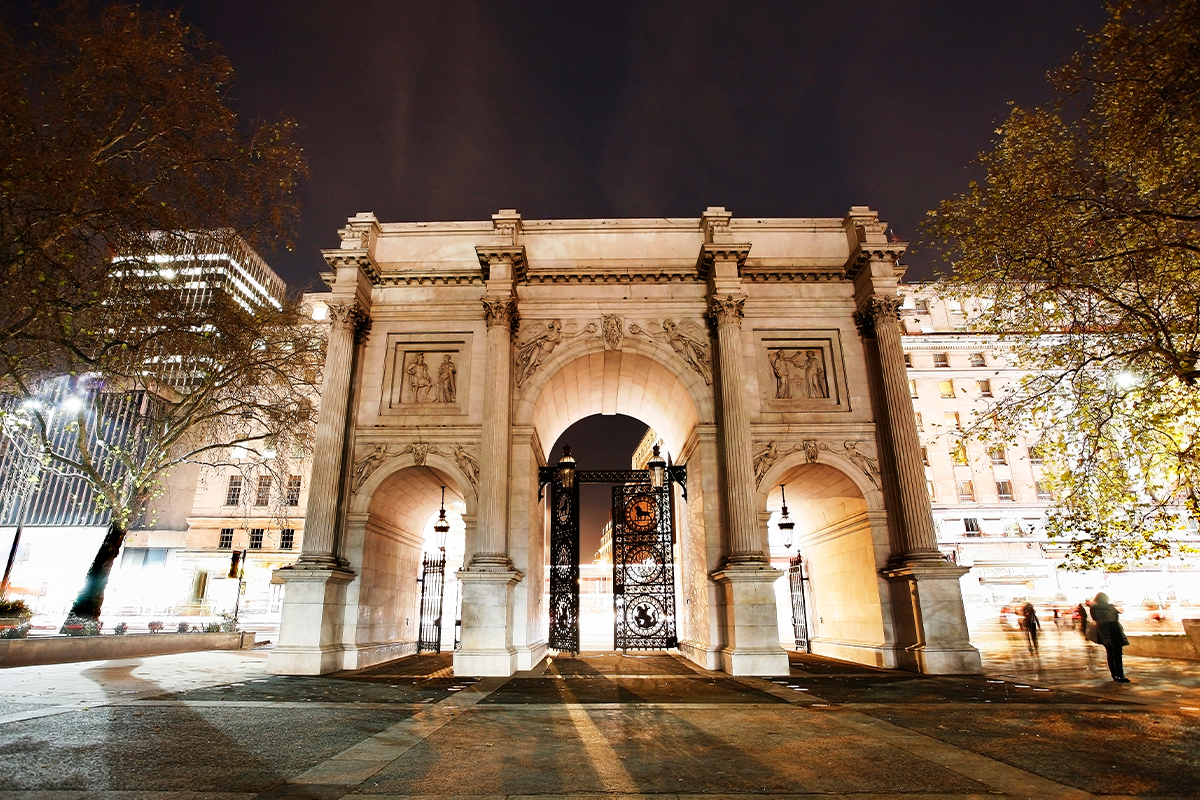 One of the most remarkable monuments in London, standing out for its majesty and history, is Marble Arch, a triumph arc located in the north-western end of Hyde Park, between Park Lane, Oxford Street, Bayswater Road, and Edgware Road.

However, only a few might know the story of the material with which it was built: pure Carrara marble directly from Serravezza, in the province of Lucca, Italy.

marble arch in londra: between the past and the present

The great triumph arc made of Carrara marble was designed in 1828 by the architect John Nash. The structure was initially thought and planned to mark and precede the main entrance of Buckingham Palace which, through The Mall, leads towards Trafalgar Square. The same area, today, is known as the site of the famous Speaker’s Corner, the spot where London’s social advocates hold their speeches and public ceremonies.

In the past, this same area was called Tyburn, and it was especially known for the death penalties executed there until 1783. John Nash’s monument celebrates the victories of Nelson and Wellington over France in the early nineteenth century, and it is s part of the architect’s project to reshape London’s city center, which is what today we call West End, gathering the most famous and busiest landmarks of the city, from Trafalgar Square to Regent Street. 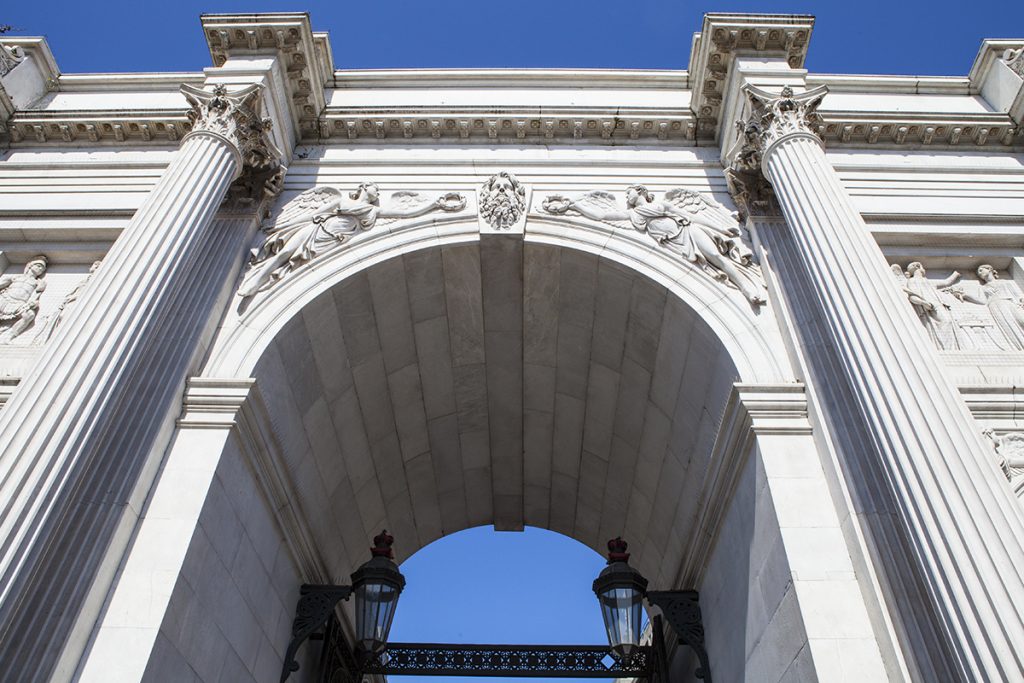 In the nineteenth century, Nash designed the huge white marble arch sourcing directly from the Italian city of Carrara: the style of the project was intentionally inspired by the Arch of Constantine in Rome. The sculptures carved in the marble, some of which in the past were removed to be exhibited in the National Gallery, are representations of England, Scotland, and Ireland.

The arch, in fact, was thought to play the role of a triumph arc during the ceremonial and official transit of the members of the Royal Family across The Mall. However, after only a few experiments, it was immediately clear that the structure was not exactly fit for its original purposes: the State Coach, in fact, was too big to get through the central entrance. Rather than adapting the royal carriages, they opted for a relocation of the enormous marble structure to a new site. In 1852, the arch was moved to the place where it is currently possible to admire it, which is the northern entrance of Hyde Park.

The passage through the central arch of the structure, however, is still for the exclusive use of the Royal Family and Cavalry. Moreover, Marble Arch hosts three halls inside, which, during the second half of the last century, were used as a local police station and, later on, became the metropolitan police station. As of today, Marble Arch is a nerve center for car and pedestrian traffic.

The arc, in fact, is located in a very busy shopping area to which it also lends its name, the extreme end of Oxford Street and the connection point between Hyde Park and Park Lane, with the subway station of the same name nearby. 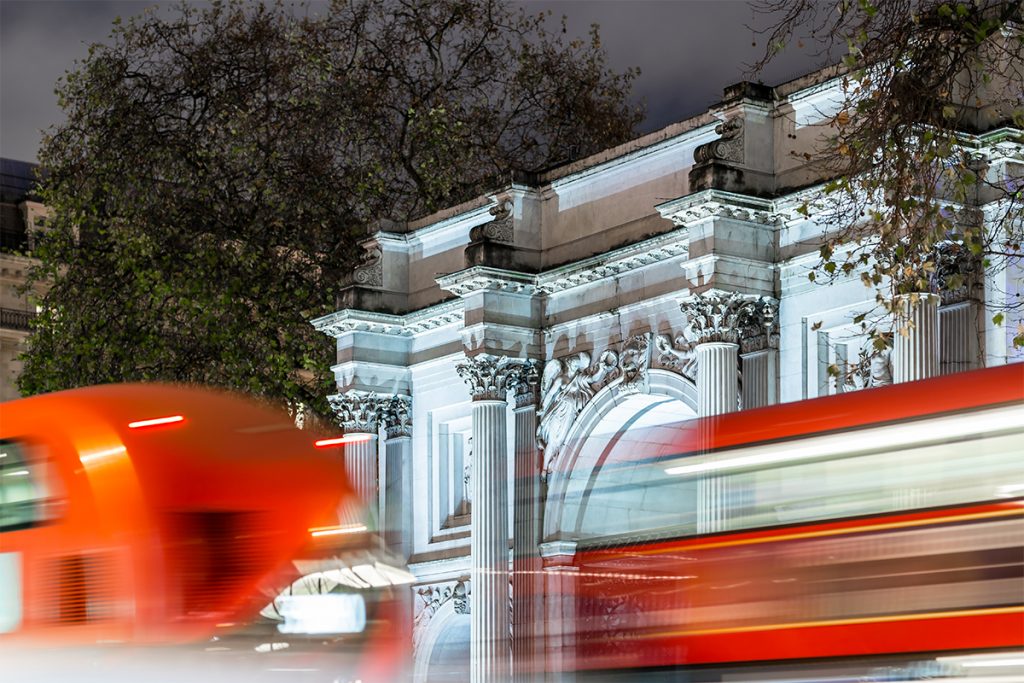 A strategic meeting point, Marble Arch is a unique symbol of the British capital. However, several environmental concerns, over the past few years, have raised awareness within public opinion towards a new relocation of the marble structure, but a final decision in these terms has yet to be made.