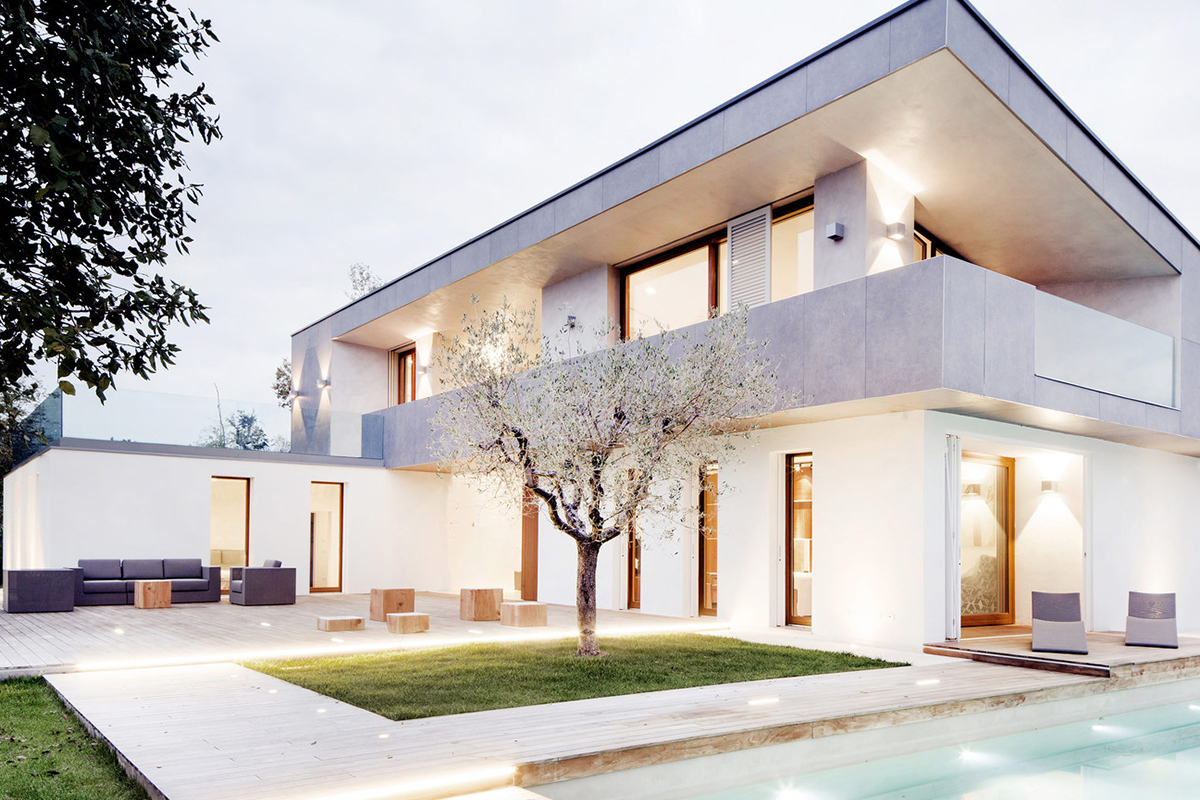 An industrial past in times of war, today a modern villa with swimming pool, the holiday home in Forte dei Marmi built by the Fabbricanove studio in 2015, is a project that gives new life to an area troubled by its historical past that also rediscovers the collaboration between designers and craftsmen.

A modern look that looks to the future but that’s characterized by handcrafted elements that highlight the Italian artisans and specifically those from Tuscany. The Fabbricanove studio defines the project as the enhancement of the “characteristics of a summer residence, through the integration of open and domestic spaces.”

The Forte dei Marmi holiday home consists of two overlapping volumes: the first, arranged in an “L” shape around the entrance patio with flat walkable roofs, is square, white, and houses the guest rooms, the living area and the kitchen; characterized by an orderly rhythm of the windows, the volume “breaks” and opens near the entrance to create continuity with the exterior and the garden. The second volume, on the upper level, which rests on the previous one, with a sloping pitched roof, is gray and compact, as if it were a sort of stone monolith dominating and protecting the garden, recalling at the same time the colors of the Apuan Alps. The second level houses the sleeping area and has a large loggia, which appears as it was carved into the stone, where the largest windows open. 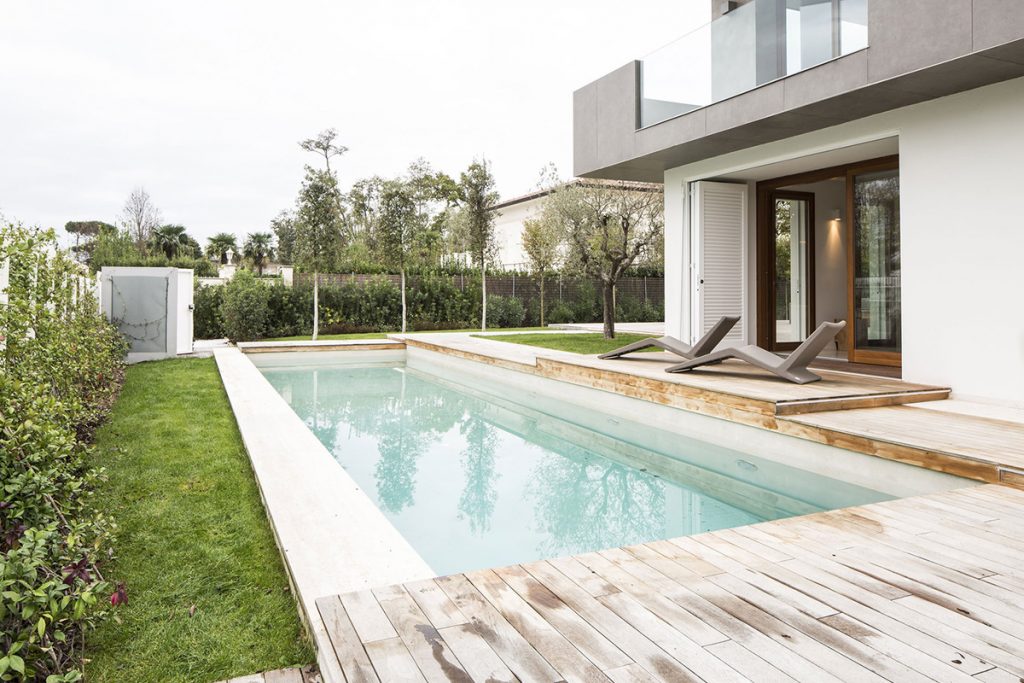 The villa contains and combines different chromatic materials and elements that are in harmony with each other, according to a complex design that recreates a warm Mediterranean atmosphere emphasized and enriched by the natural light that manages to enter through the numerous windowpanes. All windows are made of wood with a natural finish, just like the doors that feature a white lacquered. Inside, natural light is also welcomed by the flooring, which increases its “warmth”: in fact, the studio used luminous travertine slabs to maintain harmony – the famous stone that when it comes to flooring is among the most used for its resistance over time. The color palette has a harmonious effect of soft shades in hues of ivory white, beige and gray. On the upper floor, on the other hand, ceramic panels have been used in a color that tends to resemble, as mentioned, the greyish shades of the nearby Apuan Alps.

The interiors are defined by clean and rigorous lines that enhance the link between nature and the built space. Different materials such as steel and wood alternate, between unique custom-made pieces by artisans and carpenters and typical elements of modern design such as the bookcase located on the ground floor next to the white steel staircase. The red thread remains the travertine that accompanies this harmonious dance of materials. 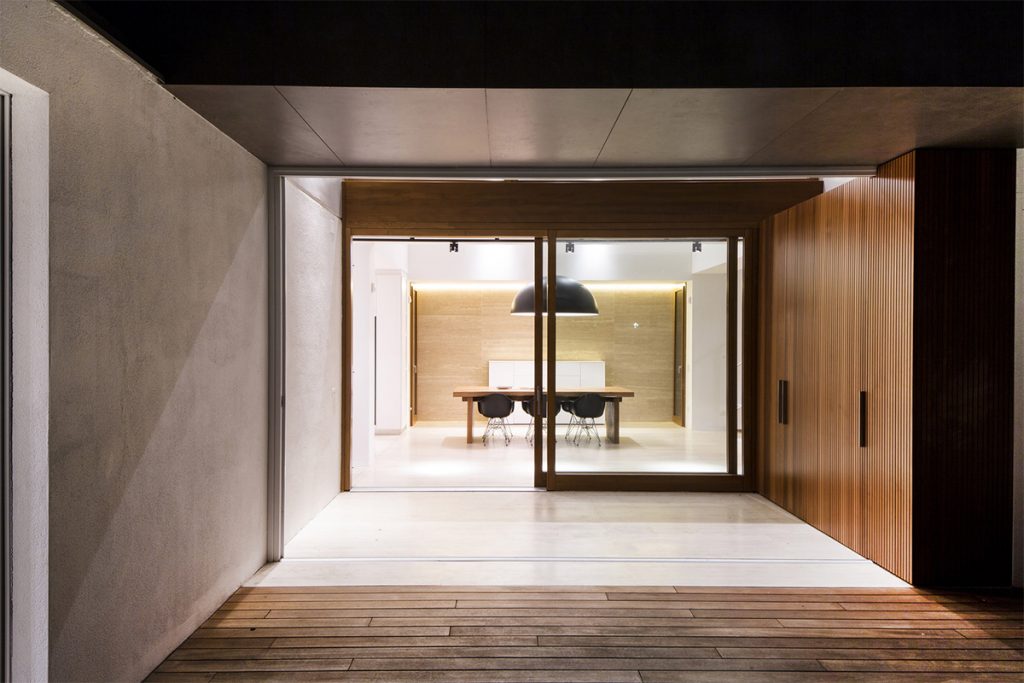 The Fabbricanove architecture studio, founded in 2009 in Florence by Enzo Fontana, Giovanni Bartolozzi and Lorenzo Matteoli, was born with the aim of investigating a new language and new substances of contemporary design. Not only design and construction activities but also education is essential for the study which is currently engaged in various public and private assignments within the university world. In 2009 the studio won the first prize in the competition for the redevelopment of Fort San Pietro in Livorno. In the same year, it was among the winners of the “The House of the III Millennium” competition for which it created and prototyped the “Luna 9” module, exhibited on several occasions in exhibitions and events.

Marmo Arredo Milano: The New Showroom Just Off the Duomo