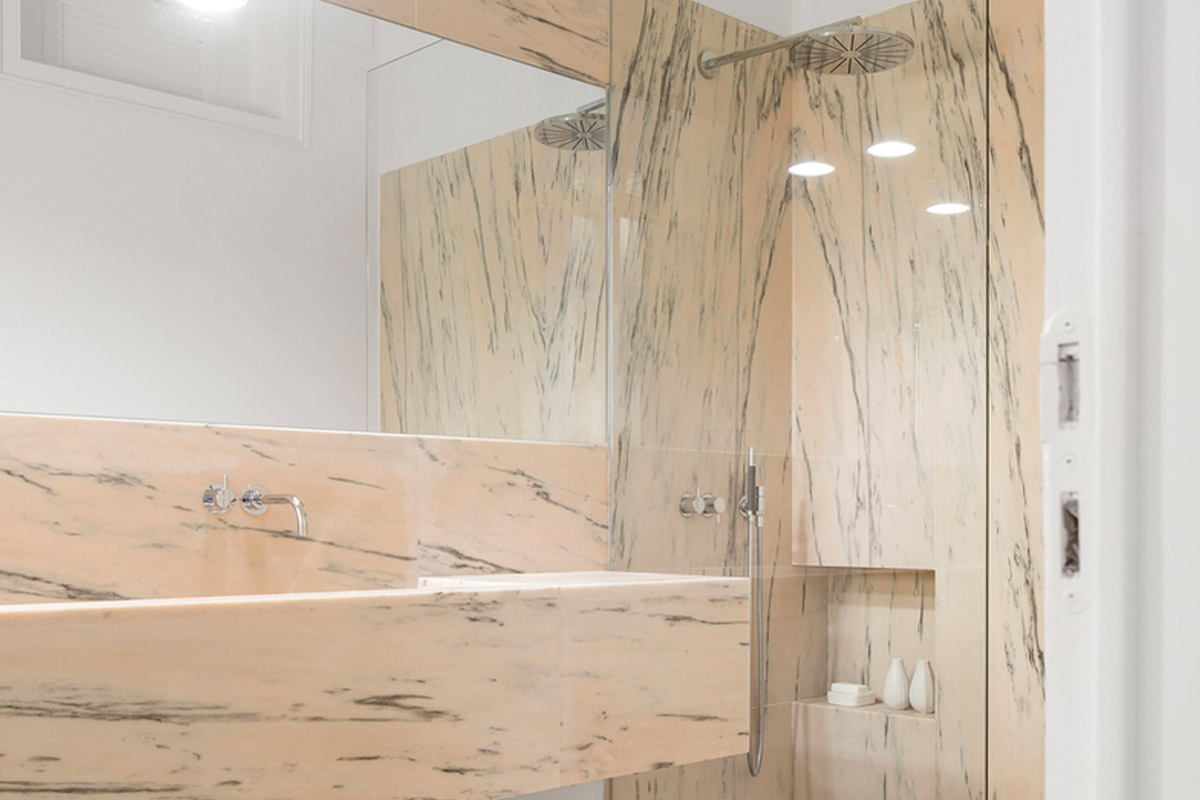 On the waterfront of Lisbon, there is a mid-1900s building constructed on the landfill established in the wake of the 1755 earthquake that changed the city and its layout forever.

On the first floor, we find the Apartment Nana, a minimalist residence, one of the first homes renovated (2014-2015) by rar.studio, a Lisbon-based architectural practice founded by Rita Aguiar Rodrigues in 2015. The apartment Nana is the synonym of balance between the original structure, which kept its high and white ceilings (like the walls) that contributes to the luminosity of the home, and the introduction of contemporary aesthetics elements to make it a timeless residence. This game of balance allowed indeed the valorization and interpretation of the architecture of Lisbon and its facets of this period. 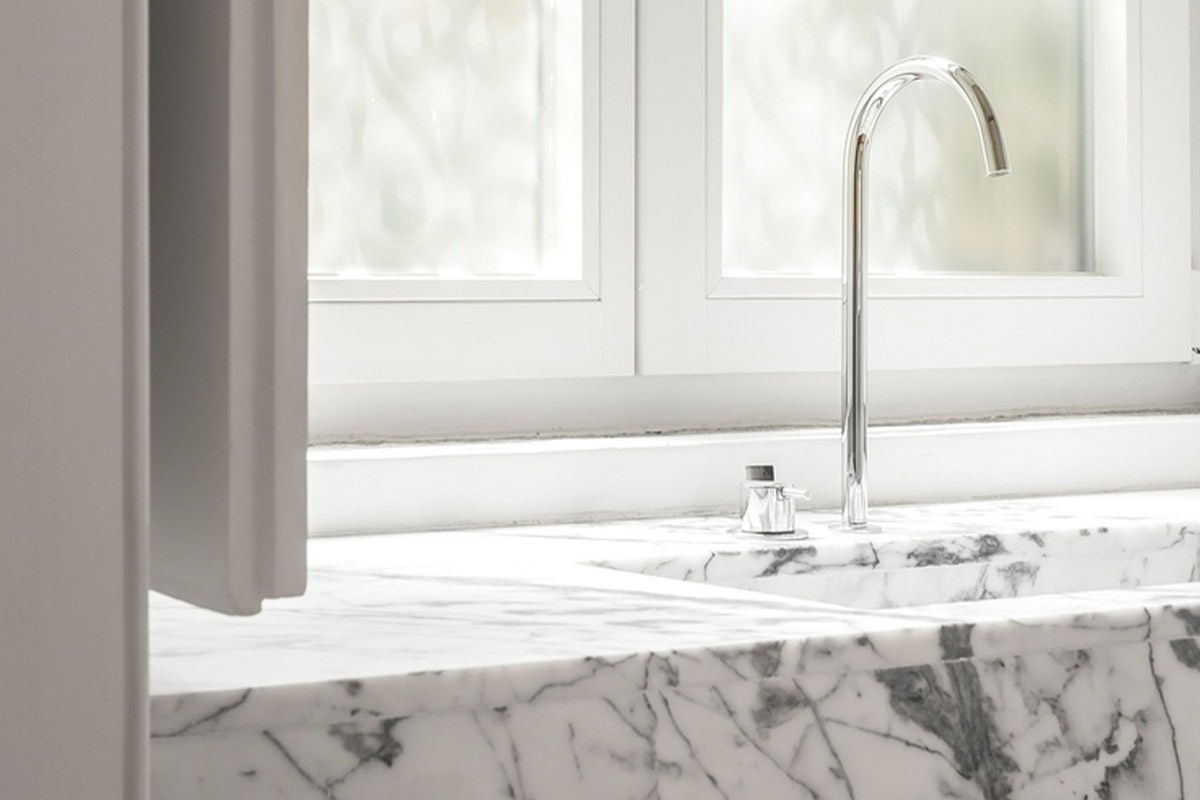 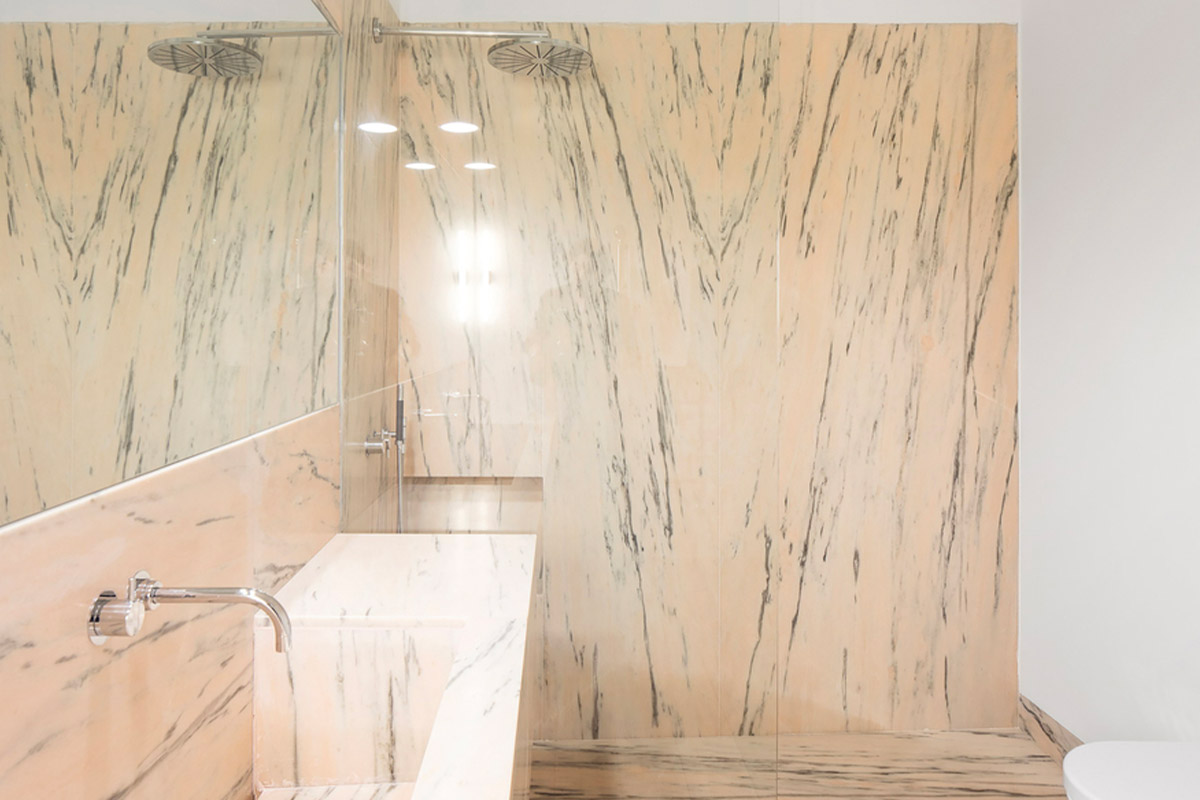 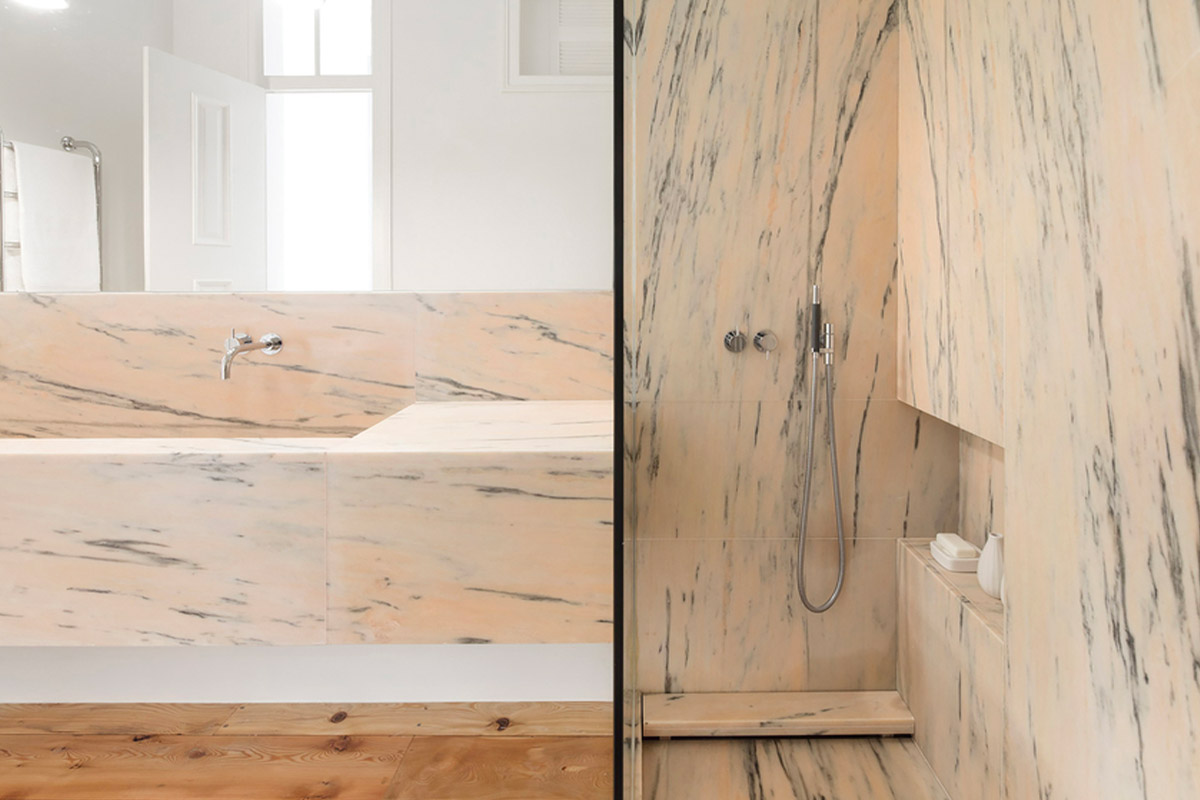 The spaces’ layout, conceived to be permanently open starting from the original design, was left as it was, whereas the bathrooms were subjected to profound intervention since at the beginning they had misaligned layouts and means of access. In the master bedroom, a new point of access was added to the smaller bathroom to have an ensuite, whereas the bigger bathroom was left for the remainder of the house.

It stands out in both bathrooms the use of Portuguese marble, Tiger skin marble in one, and pink marble in the other. Entire slabs of the two types of marble were used to create sinks, shower cubicles and splash backs. By choosing to use Portuguese marble, rar.studio left even a more decisive mark in this apartment which encloses that feeling that characterizes the Country itself: modernity and retro style, a mix felt throughout Portugal.

An ode to the Portuguese marble tradition but also a practical and functional choice, since the Lusitanian marble is known for its endurance and firmness, which is why it is often used for wall coatings, bathrooms, residential and commercial flooring as well as for decorative purposes. 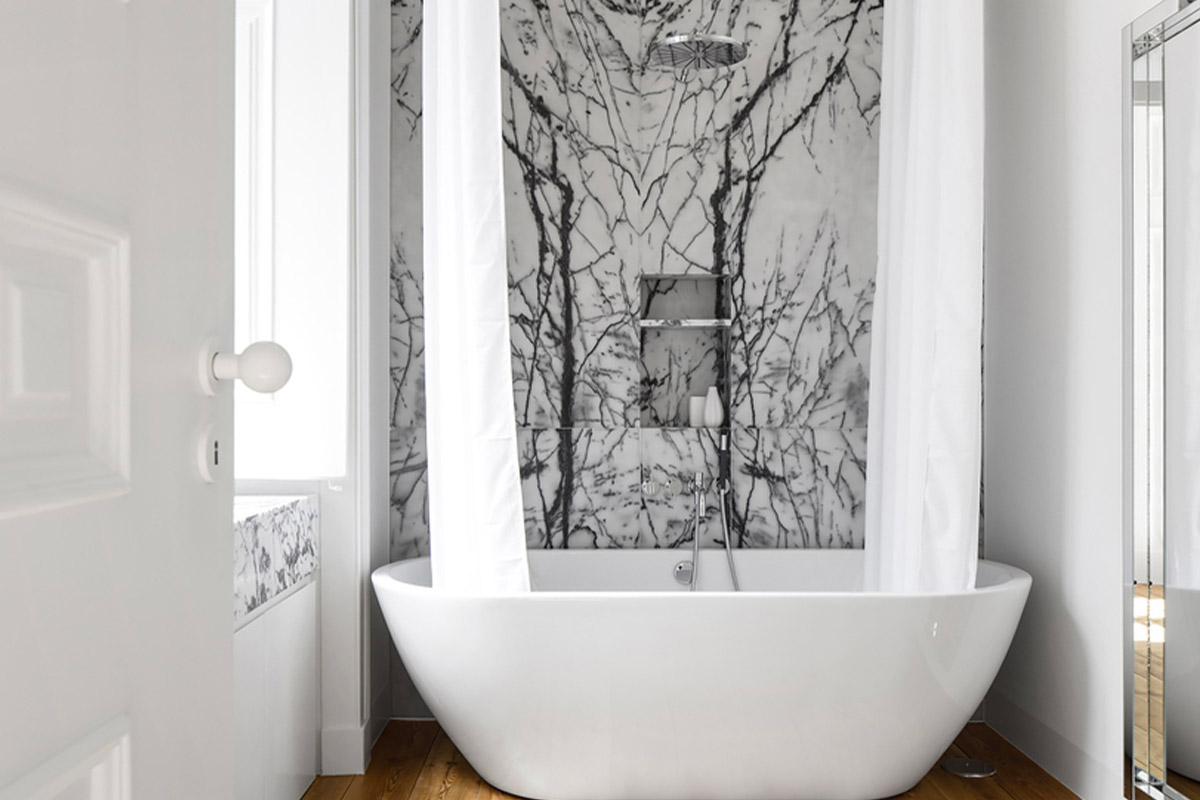 In this context, the marble is the contemporary aspect in opposition to the historical details like ceiling moldings and the above-mentioned blue and white tiles in the kitchen. A clear example of marble modern reinterpretation: a marble that shakes off the “weight” of centuries and centuries of history to be light, practical, warm and perfectly in harmony with the surrounding materials.

Two spaces “dominated” by marble for an elegant and welcoming apartment with a touch of romanticism.

The use of stone in a modern key in opposition to the minimalism of the other rooms of the house is a characteristic trait of this Lisbon-based architectural practice. It is worth mentioning the AMC apartment, located in Lisbon as well, where also, in this case, the use of stone in the bathroom creates a modern space that complements a minimal one and that fills the rest of the apartment. 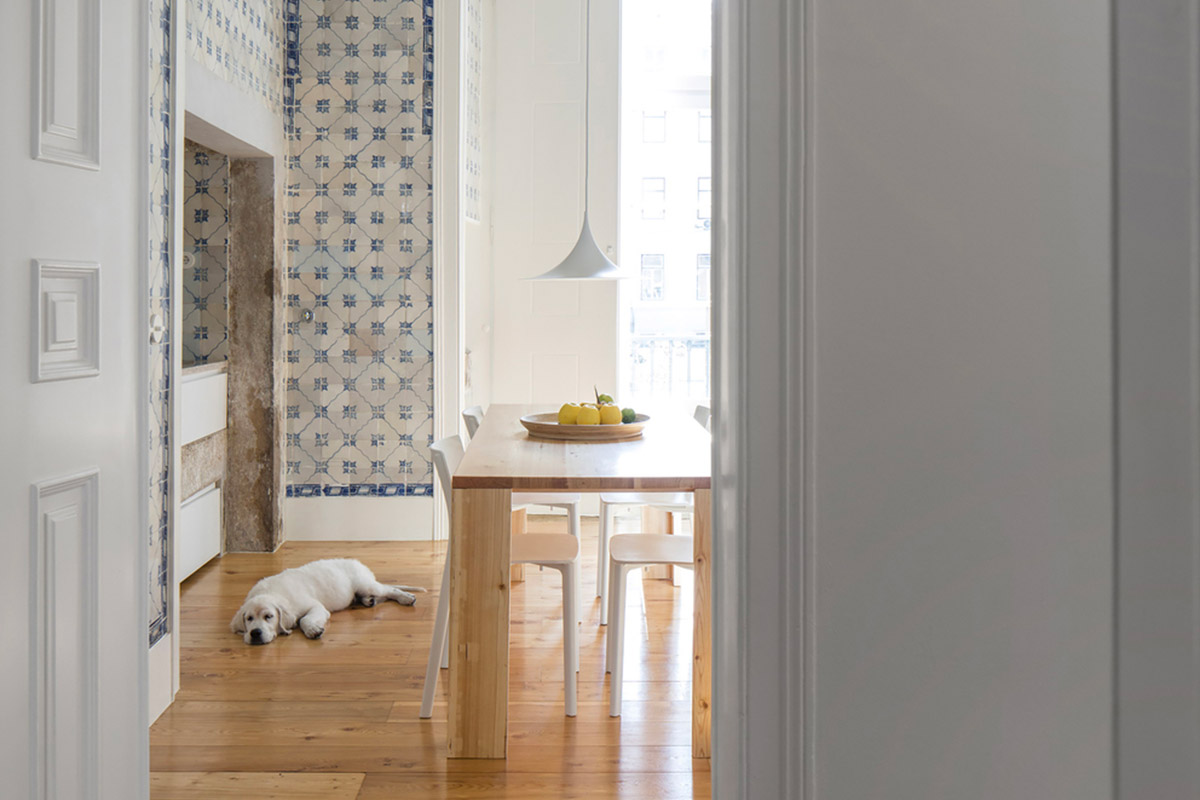